In Western Europe and in Germany, religion has become relatively unimportant to many people in everyday life. With more than a third of the population non-denominational, many do not even know that religion is taken very seriously in other regions of the world and that religious freedom, while being legally permissible, but in reality is not.

If criticism of religion or change of religion (conversion) in some places is already punishable, atheism as apostasy in several countries of the world is also threatened with the death penalty.

In 12 countries (Afghanistan, Iran, Malaysia, Maldives, Mauritania, Nigeria, Qatar, Saudi Arabia, Somalia, Sudan, United Arab Emirates and Yemen) “apostasy” can in principle be punished with death. Also, Pakistan has no capital punishment for apostasy, but for “blasphemy,” and the threshold for blasphemy can be very low. So, in fact, one can be executed merely for a declaration of of atheism in 13 countries. (IHEU, 2017)

However, in countries with Muslim majorities, the fundamental problem is that Islam is not only divided into three main denominations (Shiites, Sunnis and Alevis) and other smaller communities, but also has no central teaching / interpretation authority, but nine law schools, each with differing authorities. For this reason, we will try to outline the situation as briefly but as accurately as possible. 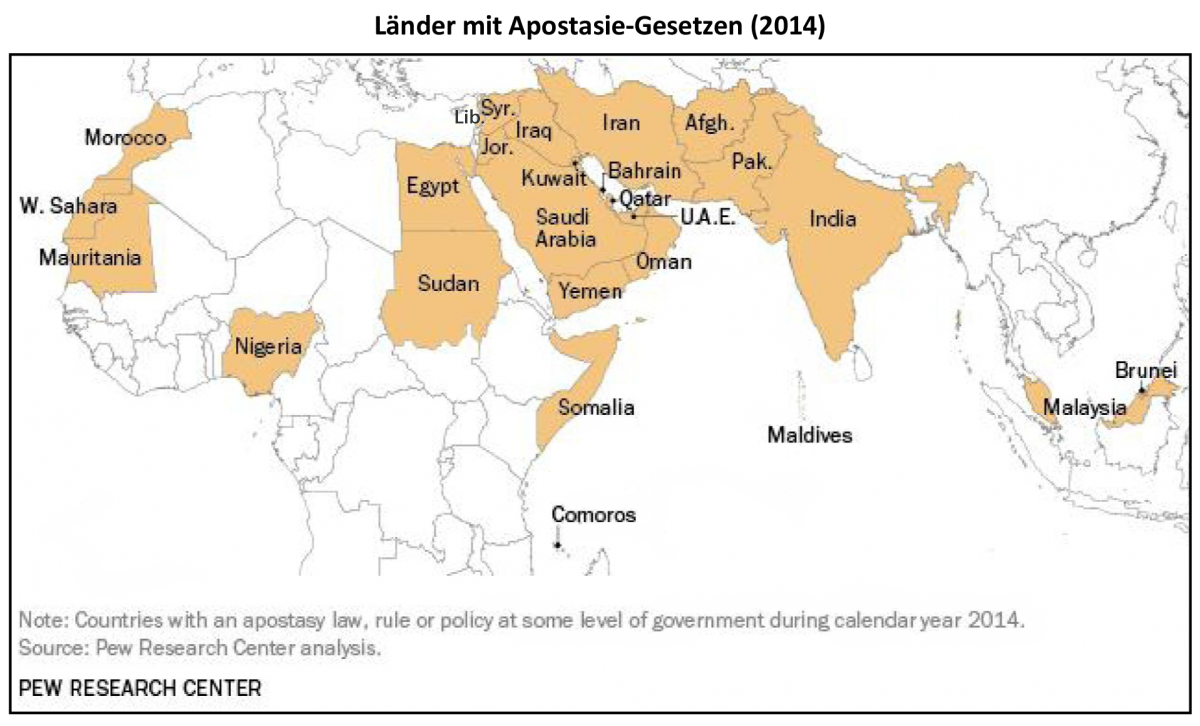 But even more often than the crime of being an atheist, there are legal measures against the public utterance of atheistic views. Many countries have blasphemy laws and criminalize criticism of their established religions, religious beliefs, religious figures or religious institutions. For example, Pakistan has prosecuted more than a thousand people since its introduction of its current anti-blasphemy laws in 1988.

The “crime” of criticizing a religion is not always called “blasphemy” or “blasphemous slander”; some countries prohibit “defamation of religion”; sometimes it is covered by hate speech laws; Quasi- “blasphemy” laws instead prohibit “violation of religious feelings” or “insulting religion.” (IHEU, 2017)

Of those countries with “blasphemy” restrictions, 43 allow imprisonment for this crime. And the crime of “blasphemy” will be punished by death in another 6  countries: Afghanistan, Iran, Nigeria, Pakistan, Saudi Arabia and Somalia. In addition, most of the twelve countries treat the “apostasy” punishable by death, sometimes “blasphemy” as proof of apostasy.

The situation is outlined below for these countries. Sources and references to further information appear at the end of this article.